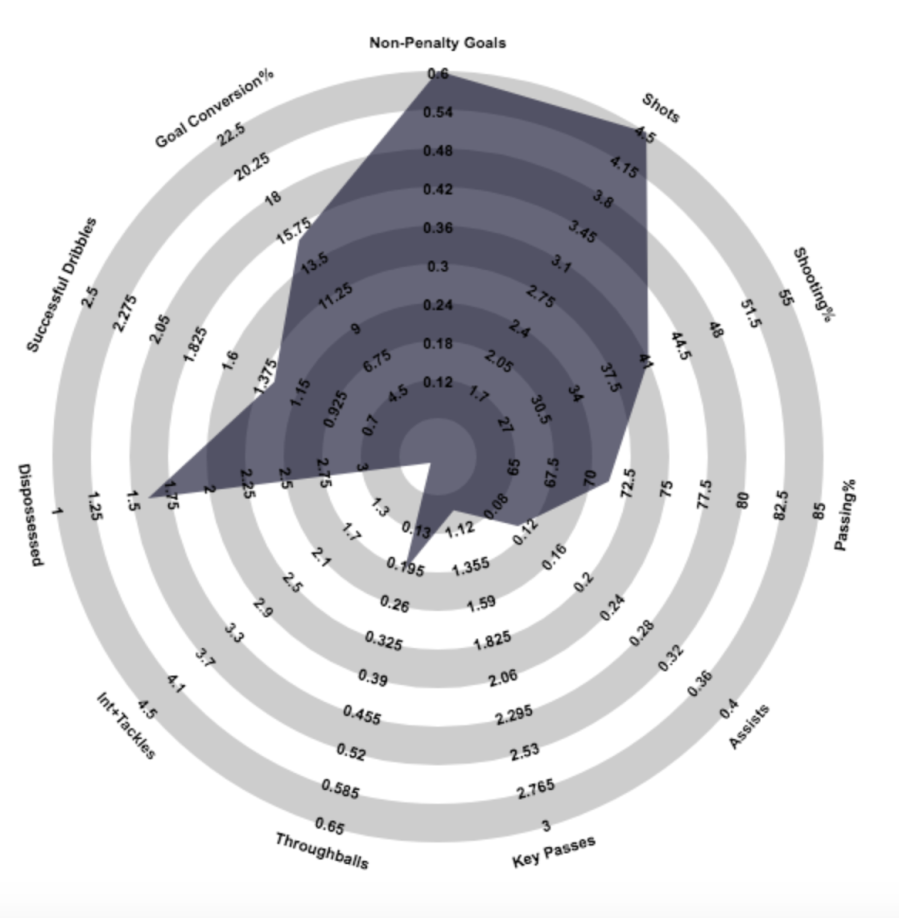 *UPDATE* This is the original post about the radars I work with. In the past year I’ve updated them. The updated primer can be found here.

Over the past few weeks I’ve been doing a lot of research with advanced stats in soccer. I’m excited to finally start posting the results of this, as I spoke about here.

One of the biggest things I’ve been doing has been creating radars, which are great for visualizing stats.

Now let’s make this disclaimer now. Free advanced soccer data on the internet is not easy to find.

I created my own radars from this excellent github page. They’re not perfect. The website has templates for forwards/attacking midfielders, midfielders, centerbacks, and fullbacks. The templates are all based on the original templates created by Statsbomb.

I relied heavily on understat.com, whoscored.com, the Premier League stats page, and the excellent work from @oh_that_crab. I also created my own spreadsheets and did several calculations myself.

Since I’m using data from many different sources, I can’t claim that it’s 100% accurate (understat and whoscored often had different results for each players KP/90 to name just one example). What I can say is that every field that is compared came from the same source – I did not pick and choose where I got the numbers from to make players better.

The radars will be fairly accurate, but the main purpose of them is for visualizing data and making comparisons.For those purposes, any discrepancies in the numbers would not be major enough to change the shape of the radar.

When it comes to radar’s, it’s extremely important to focus on the length of each line, not the actual area. Areas can be manipulated to look better or worse simply by moving the order of the variables. That doesn’t change what they’re showing though.

There is one problem. Prior to this season, Statsbomb changed their templates. Some of the data they use isn’t available for free (I’ve reached out to several people asking for calculations on how they get certain numbers but expectedly haven’t gotten a response).

I’ve had to sort of piece together stats that they use with the ones I have access to. Sometimes I do figure out how to make the calculations (if the data is available). It’s not perfect, but it does the job.

For most of the new categories Statsbomb uses, I’m able to make a pretty good substitution with a few exceptions. Last year Statsbomb added “pressures” and “pressure regains” to their striker, attacker, and midfielder templates.

Those are very important because in the modern game putting pressure on an opponent is more important to winning the ball back than actually making the tackle or interception. That rings especially true for strikers who’s pressures allow their midfielders to get easy interceptions and win the ball back. Unfortunately I can’t find any database that tracks pressures and pressure regains per match, so I can’t calculate those myself.

Mixing and matching the old templates with the new ones give me more categories than a radar allows. I have to pick and choose which ones I’m going to use for each position. That’s OK as long as when comparing players I’m using the same categories.

Comparing players is never apples to apples. Players for different teams, or different managers play in different systems. Systems matter and will have a major effect on how or what a certain player does with the ball. Systems give certain players more freedom with the ball than others. An elite player who switches system’s shouldn’t have their stats change that drastically, but it’s understandable if they do.