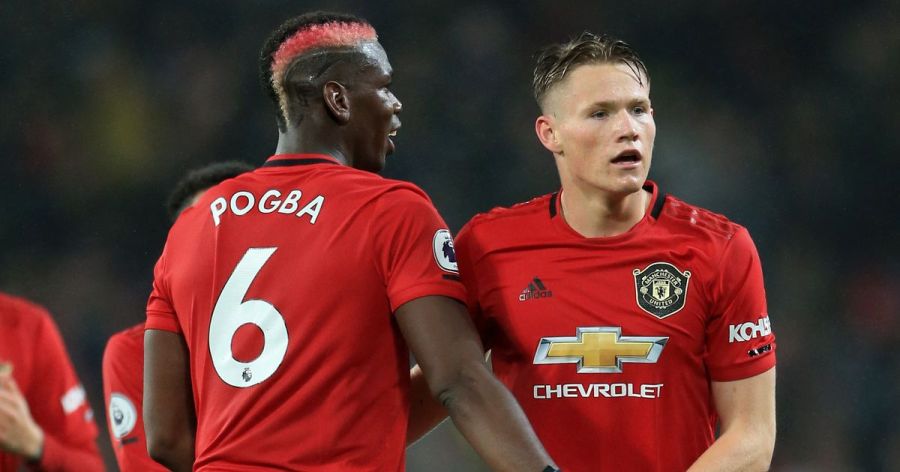 Disclaimer: Let me start by saying that this post is *entirely* speculation. I’ve got no inside info and no facts to back up any of these claims. It’s just a theory and I have zero idea if any of this is true.

Ole Gunnar Solskjaer announced he has a fully fit squad during his media session ahead of Manchester United’s Champions League clash with PSG on Wednesday.

That was a bit of an interesting declaration considering there have been two notable absences for United’s past two games. Midfielders Paul Pogba and Scott McTominay.

Pogba hasn’t appeared since a cameo at Goodison Park before the international break. McTominay played seven minutes 10 days ago against West Brom but was left out of both match day squads since.

Pogba appeared three times for France in the international break, but after being left out against West Brom, Solskjaer said his ankle swelled up at the end of the previous day’s training session. No injury has been given for McTominay. The most we know is when Solskjaer was asked on Friday if the pair would be available for Sunday’s match against Southampton he said they were both doubts as neither of them had even been training on grass yet.

Let’s start with the obvious.

It is entirely possible that there’s nothing here. Both players had picked up minor injuries, missed a few games, and now have recovered. Nothing more to it.

That of course isn’t fun.

I have a theory that there might be something else at play here.

You don’t need me to tell you that this is a weird season. You’ve only heard that 1000 times by now. It’s a 10 month grind that’s being condensed into nine months. That’s hard on anyone but on top of that United didn’t get themselves a preseason. While everyone else got a half assed preseason, United were in Germany finishing their Europa League campaign.

That’s important. For as half assed as everyone else’s preseason’s were, they all got the chance to wind down after project restart, recover, then start building themselves back up into game shape.

United didn’t get that. They got a week off, then played another three games (one of which went into extra time), then they had four weeks to wind down, recover, and play themselves back into game shape. For starters, four weeks is only enough time to do the first two things – hence why United were so out of whack the first few games this season. Secondly, with an international “break” a week before the season, not everyone even got those four weeks to recover.

Due to all these circumstances squad management is going to be a key for this season. It’s hard enough keeping your squad fit and fresh over the course of a regular season, but with more games in fewer days it’s even harder this year.

During his time at United Sir Alex Ferguson was known for finding little pockets in the schedule where he could give a player a week to 10 days off to recharge the batteries. The benefit of keeping that player fresh over the course of the season far outweighed the loss of that one player over two to three games – especially since he was hand picking which 2-3 games they would be.

That seems like a strategy Ole Gunnar Solskjaer may be thinking of employing this year, and subject number one could easily be McTominay.

While McTominay wasn’t heavily used in the Europa League, he still didn’t get much of an offseason to unwind. For footballers, mentally shutting their brains off of football for 7-14 days is just as important as the physical recovery.

Since the start of September McTominay has already played seven times for the national team. Two of those matches went 120 minutes. In October he was a prominent part of United’s midfield playing a part in all seven matches.

McTominay may not be burnt out yet, but the key to avoiding burnout is to rest before you start getting tired. McTominay is going to be an important player for United this year. They need him to be fresh – especially in matches against the likes of PSG.

It wouldn’t surprise me if Solskjaer looked at the fixture list, said “Istanbul and Southampton aren’t matches that fit McTominay’s skillset anyway” and thus decided that since he wouldn’t have started anyway he’d take a bit of a risk and give McTominay a few days off to recharge the batteries. Then bring him back fully fit to face PSG – the type of match that he’s usually one of the first names on the team sheet for.

To not draw attention to it, he’s just play it off like he’s carrying a knock. Man management like you read about.

Pogba is a bit of a different story.

It’s no secret that the Frenchman hasn’t been great this season and the comments he keeps making when on international duty aren’t doing him any favors – and personally even though they’re constantly being taken out of context I don’t think Solskjaer is too happy that he keeps giving the media an opportunity to take things out of context.

Pogba tested positive for COVID just before the season and it was clear that had an effect on him in September. Thus, he never really got a chance to play himself into the season. Right from the get go he was the target of the media and the fans who were all too eager to blame him for United’s poor start.

Pogba played three times for France in the last international break. He came back to Carrington and said he was feeling better than at any point this season. Then he was dropped from the squad.

I wouldn’t be shocked if like McTominay, Solskjaer was giving Pogba a rest. Pogba didn’t need the physical rest the way McTominay did but it was the chance take him out of the limelight.

Coming in to the West Brom match Pogba didn’t deserve to start based on club form. But based on international form he did (vice versa for Bruno). No matter which choice Solskjaer made that would have been the headline.

Instead he chose the “injury” path, and challenged his team to win without him. Not only did they do that but their last three games they’ve also put up their highest xG totals without Pogba in quite some time. The club has like 98% moved on from him. I mean, we haven’t even been talking about Paul Pogba for the past week! When was the last time that happened?

That’s good for both Ole and Pogba when he’s able to return. He’s not walking back into the starting XI and it’s not a story because the players ahead of him are actually performing (unlike the start of the season where no one was). There’s far less pressure on him now. If he wants to get back into the team he’ll have to perform. If he performs United will be winning and everyone will want him back in the team.

Of course there’s also the chance that Pogba’s ankle did swell up at training last week. This happens all the time and players usually play through it. But if that swelling caused Pogba to play at anything less than 100% he’d never get the benefit of the doubt. So instead Solskjaer said ‘we’re going to rest that up until it’s fully better.’

It could just be two players getting minor injuries at the same time and recovering from them at the same time. It could also be Solskjaer doing some man management. Choose what you want to believe.