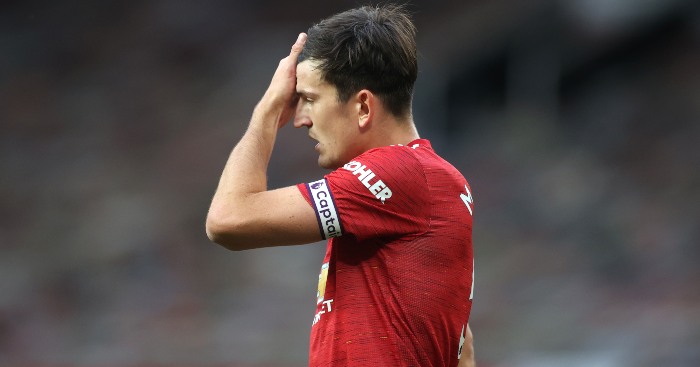 Harry Maguire is not the best center back in the world. That statement is true now and it was true when Manchester United paid a world record £80 million fee for him a year. He never was.

Expecting him to be the best center back in the world because of his fee is not only naive but incredibly lazy analysis that shows a lack of understanding of how the transfer market works.

Maguire’s ability is only a small factor in his world record fee. The much bigger factor is simple economics; Supply and Demand.

United needed a centerback. They didn’t want just any centerback. The manager identified Maguire as the guy, the only guy, whom United could mold their defense around. He was identified for both on and off field characteristics.

That right there makes his price go up. If it was just any centerback United could have been quoted £80 million by Leicester City and said “right, we’ll look elsewhere.” But when Maguire is the only option there is no elsewhere to look.

That was Ole Gunnar Solksjaer’s attitude. A year before Maguire was also the number one centerback target of Jose Mourinho, though according to Andy Mitten he told the club not to spend more than £50 million for him.

It’s a tremendous bit of business that Leeds United managed to get £30 million from Manchester United for the sale of Rio Ferdinand back in 2002, considering that Leeds didn’t have much of a leg to stand on. They desperately needed the money.

If it was 2003, offering something like £20 million to Leicester – enough to cover the operations of the club for well over a year – would have easily freed Harry Maguire from the four years remaining on his contract. It would have been silly for Leicester to turn that down.

But 2019 is a different world. Thanks to the Premier League’s lucrative TV contract every club is more than financially solvent. They don’t need to sell players to make ends meet.

That put Leicester in an even stronger position and thus makes Maguire’s price go up even more. At the start of the 2018-19 season, Maguire signed a new five year contract with the Foxes, giving Leicester all the power in the negotiations.

United inquired about Maguire, Leicester said “we’ll sell him if we get a world record fee,” and they had the ability to stand firm on that. Ed Woodward had a choice, pay the £80 million Leicester wanted or appear to not be backing your new manager… again.

Maguire arrived at Old Trafford and was very good full stop. He was never going to live up to the expectations of many because many lofted those expectations on him solely because of his pricetag, which again, is completely unrealistic given his profile as a player.

Maguire isn’t without his flaws. But what player isn’t? Sure Maguire lacks pace but how often has that lead to the ball being put in the back of United’s net? Steven Bergwijn? As bad as Maguire (and everyone) did on that, David de Gea should have stopped that shot.

While everyone focuses on Maguire’s lack of pace we should really be focused on what he does when things break down and there’s a scramble in the box. He’s quite poor!

Maguire helped improve United’s defense tremendously. United became one of the most organized teams in the league and were very tough to break down. They had the third lowest expected goals against, and conceded the third fewest goals in the league despite a nightmare season from David de Gea.

Maguire did not have an easy job. Tactically he was required to do a lot of other people’s work. He had to shift over to the left to help out Luke Shaw, Ashley Young, Brandon Williams, whoever was playing left back for United. Whether he was matched up against your aerial threat or not when balls came in he’d have to switch with Lindelof to be the primary aerial defender. When Fred played in midfield it would be Maguire who had to swap with Fred and step up into midfield to contest long goal kicks.

His role was anything but straightforward.

It wasn’t just Maguire’s on pitch abilities that Solskjaer wanted. Maguire’s leadership qualities came out quickly too. Maguire was named United’s captain in January, but sources with access to United’s dressing room have told me “by September everyone knew this was Harry’s team.”

Maguire was quick to organize team outings outside of training. Players were fined if they didn’t turn up. He’s been credited with really helping foster the togetherness of the team.

Maguire was a rock for United, playing in 55 matches, helping them finish third in the league (with the youngest team) and reach the semifinals of three other cup competitions. When United’s Europa League season finally ended he, along with all his other teammates, were told to go on holiday, unplug, and forget about football.

That’s what Maguire did, traveling to Mykonos with friends and family and that is where trouble found him. We all know about his arrest, the farce of a court case, and now his appeal.

Suddenly that mental break that all footballers need didn’t happen for Maguire.

Maguire, like all his teammates, has been incredibly poor this season. I usually don’t agree with the narrative that players are distracted by off the field issues but it’s clear Maguire is.

His arrest and performances have now started this narrative that he shouldn’t be the United captain. The popular opinion is that it should be Bruno Fernandes, because he came in and started acting like a leader. He would yell at teammates on the pitch etc etc.

Of course, those sources with dressing room access have all said the same thing. Everything that Bruno has done at United, Maguire did in his first month too.

Maguire certainly hasn’t looked like a leader over the first three games of this season. Any claims that he shouldn’t be United’s captain have some merit.

But then who does it go to? Bruno? Bruno hasn’t looked like a leader on the pitch either. His form has been even worse and while his spot kick secured the three points at Brighton, he was the one culpable for Brighton’s late equalizer in the first place. (Who won the spot kick? That’d be Maguire).

At the moment United look like a team completely devoid of any leadership. If someone was clearly demonstrating the leadership abilities then maybe we could have a conversation about this, but no one is.

So no, Maguire shouldn’t have the arm band removed from him. But what do you next? Or rather, what does Maguire do?

The obvious answer is, withdraw from the England squad. This isn’t a punishment. Maguire simply needs a break. Not necessarily a physical one, I don’t think playing two international matches will really wear him out too much, but he very much needs the mental break.

No, instead Maguire should withdraw from the squad. Go on a 10 day holiday, the 10 day holiday you should have gotten after the Europa League, and really just disconnect. Don’t think about football. Don’t worry about anything. Just recharge the batteries.

When United return from the international break they’ll face a trip to Newcastle before things get really tough. Let Maguire rest in that game, start Eric Bailly alongside Victor Lindelof.

The two played together in United’s win over Brighton in the League Cup on Wednesday. They didn’t just play well individually, they performed well as a partnership, bringing out the best in each others’ games. But that was Brighton’s B team, it’s hard to really gage how good they are. Let them play against Newcastle and then make a decision on who to go with from there.

Send Maguire the message, you’re our captain, we’re behind you, but you’re not undroppable. Most importantly, give Maguire time to clear his head. He needs it.

One thought on “What’s wrong with Harry Maguire”