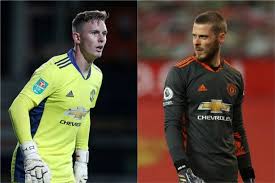 Dean Henderson made his Manchester United debut Tuesday night in the Carabao Cup match against Luton Town. He made a nice save – albeit one that a keeper should make – and kept a clean sheet, something that United is expected to do against Luton Town.

Juxtaposed against the backdrop of United losing 3-1 to Crystal Palace at the weekend and David De Gea’s poor form over the last two years, it wasn’t surprising at all to see people rush to say that Henderson should take over the #1 shirt from De Gea.

Pump the brakes for a second. This was Luton fucking Town. They got two shots on target and one of those was saved by Eric Bailly.

This has happened before. Last year there were plenty of calls to give Sergio Romero a chance because he was keeping clean sheets against illustrious opponents like Astana, Alkmaar, and Colchester United. As if that’s the same thing as facing Premier League opposition.

The difference here is that Henderson actually has a year of Premier League experience, and he was quite good in that year.

But there’s a difference between playing in goal for Sheffield Untied and playing in goal for Manchester United. The plan was always to let Henderson play in the cups, probably some Champions League group stage games and go from there. Personally I’d like to see him play in six or seven Premier League matches as well regardless of de Gea’s form, really ramp up that competition.

Ultimately, this is De Gea’s job to lose. Not only does it have to be but that’s just how Solskjaer operates. He’ll always give his veterans every opportunity to win/lose their jobs before testing out a youngster. United may have lost 3-1 on Saturday but it’s not like those were De Gea’s fault. He even saved a penalty for the first time in four years (sort of).

The presence of Henderson breathing down De Gea’s shoulder should wake the Spanish keeper up and help bring back his form. If it doesn’t, and Henderson is performing in the cups, it won’t take long for Henderson to get the number 1 shirt.