If you missed Part I of the preview, catch up on it here.

Before we jump in to part II, let’s just repeat this little paragraph from last year because frankly it bears repeating over and over and over again until everyone constantly remembers it.

What’s ticked me the most over the past week has been the amount of negativity coming from both the fans and the local media (as always my boy Sam Luckhurst). It’s astonishing! You’d think the title and Champions League spots are decided based only upon the names you signed and what club they came from. It’s almost as if fans are basing their feelings around who the club didn’t sign rather than everything else.

Great. Now let’s jump in to part II. Where were we?

Another team I’m pretty lukewarm on.

Unlike Mikel Arteta at Arsenal, Jose Mourinho did manage to improve Tottenham’s underlying numbers (though they are still down compared to what they were at the height of the Pochettino era) but the question is what now?

They’ve added some nice depth at right back but Pierre Emile Hojbjerg isn’t much better than what Spurs already have in midfield. Just makes their mediocrity deeper there.

Tottenham’s reliance on Harry Kane is downright dangerous. If Kane goes down, they’re in trouble, especially if Son goes down too. And Kane has a history of going down! Hard to imagine that won’t come into play in this very condensed season.

Tottenham are a weird club. I can see them pushing for the top four but likely coming up short again, or I could see them completely collapsing. I think the latter is more likely than a top four finish.

Ah finally, the team everyone wants to talk about.

Chelsea came off a fourth place finish and immediately proceeded to throw silly amounts of money in the transfer market signing an impressive haul of players. 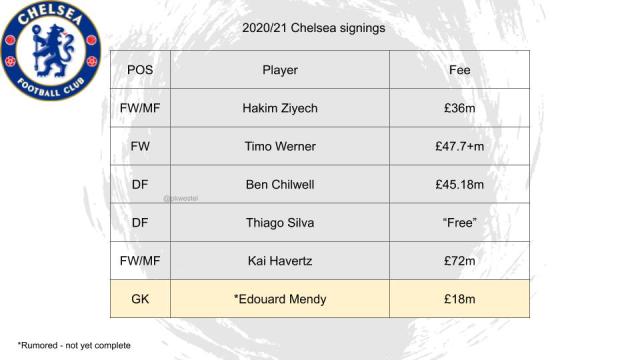 Their spending spree has had two effects. The first is United fans that despite only one club getting “better” United now have no chance to finish in the top four. The other is people now thinking Chelsea are right up there competing with Liverpool and Manchester City for the title.

Let’s pump the brakes a bit. Read that paragraph at the top again, specifically this part “you’d think the title and Champions League places are decided based only on the names you signed.”

Stop assuming that all these signings will work out. Ole hitting on his first five signings is an anomaly. The majority of transfers don’t end up working out. And looking at Chelsea’s transfer history over the past few years, well…

Now, I really like Timo Werner and Kai Havertz, I think they’re generational talents who will thrive in the Premier League but we’ve seen talented players flop before. As for the other players, I’m not exactly sure Chelsea fully addressed their needs.

Ben Chilwell looks to be a nice signing but is he actually an upgrade over what they have at left back? 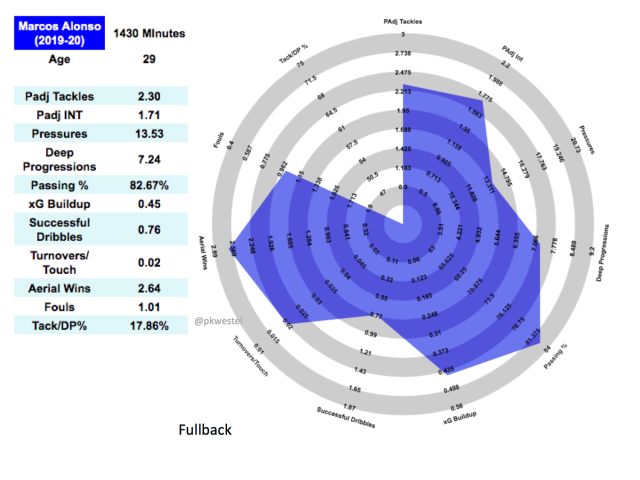 Marcos Alonso isn’t good enough defensively to play in a back four anymore, hence why Azpilicueta had to play there often. If Chilwell an upgrade on him defensively? Probably not, he’s younger though so that’s good.

34 year old Thiago Silva, a six foot defender who doesn’t win headers, is that going to help you with your set pieces?

I’m also not sold on Mendy being the answer to Chelsea’s goalkeeping woes. Now look, Kepa was really bad last year. His PSxG +/- of -9.1 is laughably bad. Signing basically anyone would be an upgrade on that.

Last season Mendy had a PSxG +/- of +1.7 – much better than Kepa but he also played behind a very good defense. He’s not getting that at Chelsea. Mendy is really good at collecting crosses which they say should help on set pieces (we’ll get to that) but he’s not *that* much better than Kepa in that regard.

The biggest issue with Chelsea though wasn’t just the set pieces, it’s how many goals they concede on counter attacks. Chelsea were very vulnerable in matches where they had a lot of the ball last year (just like United were but the media won’t talk about that). That comes from a midfield that lacked pace and was consistently overrun. They did nothing to address that. Yes N’Golo Kante was hurt for large parts of the season but N’Golo Kante also hasn’t been “N’Golo Kante” for two years now. There’s a lot hinging on the shoulders of Billy Gilmour this season.

It’s unclear how their arrival will impact the rest of a young team who got their chance last year and lead Chelsea to a top four finish.

Slotting in Werner at center forward would probably not help the confidence of Tammy Abraham. Werner could also play off the left but that’s where Christian Pulisic marches and he was Chelsea’s best player last year.

Christian Pulisic actually did a decent job replacing Eden Hazard but the drop off defensively is definitely a concern.

Chelsea had two major problems last year. They couldn’t defend set pieces and they conceded a lot from counter attacks. Frank seems to think these problems are because of personnel, the truth is they’re probably far more tactical.

Chelsea Men's team concede corner goals at a rate better than almost any team in the world scores them. 😬 https://t.co/nTOfK3Jvzx

Looking back at last season, Derby had the worst xG in the league on corners against, and 7th worst in goals conceded on corners.

So yeah, the problem is almost certainly systemic.

Frank never managed to fix Chelsea’s defensive issues when they had more of the ball or their set piece problem the way Ole did in the second half of the season. It remains to be seen whether he can.

Oh right, this whole piece has been about all the question marks surrounding United’s direct rivals. We haven’t yet talked about why United will win themselves a top four finish.

United got very tired at the end of the season and I think that’s caused a lot of us to forget just how good they are when they’re not tired. (They also dominated Sevilla but just didn’t put the ball in the net but whatever).

Heading in to last season Anthony Martial and Marcus Rashford had combined to score 61 Premier League goals over the proceeding four seasons. Last year they combined to score 34 – and they each missed significant time with injuries. They are still getting better and making the jump to the next level.

Mason Greenwood added 10 goals playing just 1320 minutes (just 14.6 matches) for a remarkable 0.68 goals per 90. He probably won’t sustain that G/90 pace, but it’s not a stretch to say that he’ll both increase his minutes and total goal tally next year.

Aaron Wan Bissaka “can’t” attack, yet his four assists were the joint most United have gotten from a right back since Gary Neville had four in 2003-04! He’s only 22 and was signed as a raw talent. He’s still getting better.

For as “bad” as Dan James was last season his final league tally of three goals and six assists is a total you would have signed up for at the start of last season. He was overplayed due to injuries and that hurt his game. He was always supposed to be just a squad player and he’ll (hopefully) be able to have that role this year which should help continue to grow.

Oh right, United also only had Paul Pogba and Bruno Fernandes for one third of the season last year. We all know what Fernandes did, now imagine that over a full season.

Playing as a deep midfielder Paul Pogba contributed 0.30 G+A/90. Given that other than last season he doesn’t have a big history of major injuries, it’s fair to say he’ll be involved more often this year. If he plays 30 (league) matches this year, and contributes at the same pace, that’s another nine goal contributions. If he pulls his form back up to what it was in 2018/19 (let’s split the difference and say 0.37 NpG+A/90) that’s another 11 goal contributions.

United haven’t added much yet. Danny van de Beek is a tremendous signing that will allow them to give more rest to Bruno Fernandes and Paul Pogba. Jadon Sancho is going to arrive. Hopefully another does too. It’s frustrating that it’s taking so long but the structure over the Sancho deal is holding everything else up given how many unknowns there are about what 2020/21 revenues will look like.

Yes United need depth and they need it badly. Only signing two players is a failure, and United don’t have any game changers on the bench. But let’s not act like any injury to a star player will ruin the season.

Last season United had to play seven matches with only one of Marcus Rashford, Anthony Martial, Paul Pogba, and Bruno Fernandes. That’s nearly a fifth of the season. They still finished third! They played half the season with only two of them, picking up 1.95 points per match and scoring 1.74 goals a game. Adding Van De Beek only helps with that (now you only need two out of five), and that’s not even accounting for Mason Greenwood.

Yes, the bench isn’t good enough but frankly, after the restart we really only saw them when in a fully rotated side. When you play all your backups except Bruno you’re not going to be successful. But when you only make one or two changes the rest of your players can carry the team.

Playing Juan Mata or Daniel James with Bruno, Pogba, and Martial is much different than playing them with Andreas Pereira and Scott McTominay. We’ve seen how much better they are when they play with good players. Properly rotating the squad one or two players at a time will go a long way in avoiding a drop in performance while also keeping the top players fresh.

It’s definitely frustrating that United aren’t getting their business done quickly but they’ll get it done. But even if the board completely fails Ole and the rest of the club, don’t forget how good this team is.

They’re going to be fine.