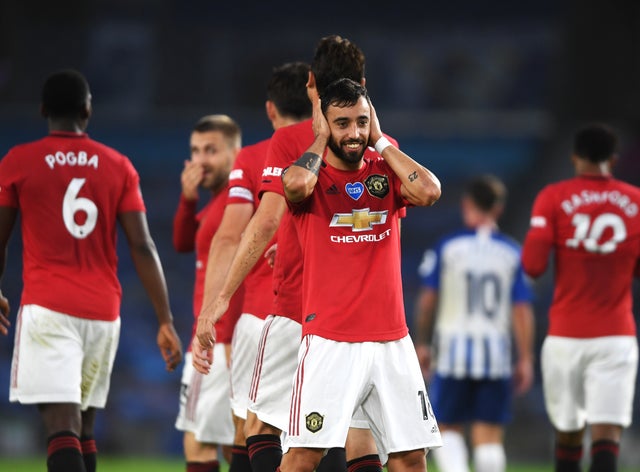 Just like last week I figured I’d throw down my thoughts right after the game. Compare em to a full write up later.

Holy hell does it make a difference. It showed in two areas, Paul Pogba, and Anthony Martial/Marcus Rashford.

Rashford and Martial did NOTHING this game. Martial was basically invisible and while Rashford was trying, he still just doesn’t look anywhere close to what he was before he got injured. What happened when they were shit? United won 3-0. Go back to the first half of the season when United needed both of those guys to be completely on their game if they were going to have any chance of winning.

Pogba finally gets on the score sheet with an assist and I thought it was his worst game since coming back. He didn’t do much, but he also didn’t have to do much. The creative burden was picked up by Bruno Fernandes, Mason Greenwood, and interestingly Matic. It just shows how nice when you don’t have to rely on Pogba every game.

More on Pogba. If we were doing classic player ratings I probably would have given him a 6.5/10. He moved around a lot, got into the tackles, but overall he didn’t do much. And that’s the problem with player ratings because even when Pogba plays simple and doesn’t do much it still has such an impact on the game. When you look at how Brighton cut through United’s midfield like a knife through warm butter as soon as he left and suddenly that 6.5/10 should have been an 8/10.

Statistically speaking the Matic-McTominay midfield partnership has always been the worst one in United’s midfield. I got a bit scared when Solskjaer went to that with a half hour left to play and it wasn’t surprising to see Brighton immediately started getting chances. I would have either gone with Fred-Matic or brought on Fred with McTominay and played the two of them as a pair.

United’s formation sure is interesting with Luke Shaw bombing down that left wing and often being higher up the pitch than Rashford.

Another assist for Aaron Wan-Bissaka. I’ve been saying since January the attacking part of his game has improved tremendously. Maybe now people will stop calling for Diogo Dalot – who was abysmal on Saturday again.

Really can’t wait to see the xG breakdown from before Pogba/Bruno came off the pitch to afterwards.

Giving this it’s own section because I think it’s a big one.

Really weird final 10 minutes for United. Occasionally they attacked but sometimes they’d have a good attack going forward and then Andreas, Dan James, or McTominay would pull up and just start kicking it around to run out the clock.

I get it, you want to see out the game but here’s the thing. Occasionally you were still going forward so pick one or the other. Aaron Wan-Bissaka was still bombing down the right win so if you’re not going to attack, save his legs and tell him to hang back.

More importantly though, go for the attack! You subbed off your four most important attacking players, so up front you’ve got fresh legs. The players on the pitch should be playing with something to prove, like they want more playing time or something.

Most importantly, a fourth goal was very much there for the taking. Go and get it. I understand the risk of not wanting to concede but it’s not like we’re seeing out a 1-0 game here. The game wasn’t in the balance, only the scoreline.

Why is this important? Because Champions League football might come down to goal difference. United entered the day six points behind Leicester (Chelsea are going to pass Leicester) and 13 back on goal differential. Now, they’re three points back with 10 goals separating them (Leicester have a game in hand).

Now remember, United play Leicester on the final day of the season. Every chance in the world fourth place will on the line that day. United can very easily get to within three points of Leicester by the final day. That means a win puts them level on points, but they’d have to catch Leicester on goal difference.

That’s not easy with six games left but not impossible either. United have picked up a +6 in their last two games. Their remaining schedule is Bournemouth, Aston Villa, Southampton, Crystal Palace, and West Ham. In each of those games United have a chance not only to win, but to win big.

Even if Leicester win United can claw back a goal here or there. But in order to catch them Leicester will have to drop points. If they lose then the difference is at least one fewer. If they draw, the more United score the more they pull back.

Let’s say Leicester get a draw in their game in hand. Now United are four points back and it’s still 10 goals separating them. Let’s say Leicester win their next game by a goal, if United could pull out a 3-0 or 4-0 against Bournemouth then you’re getting +2 or +3 on them. Suddenly it’s seven goals. If Bournemouth drop another point with another draw, United can pull two or three more goals back there.

Just remember, when they meet on the final day of the season a win for United automatically swings the goal differential by two. They win 2-0 and that’s a four goal swing. That’s very manageable, and United should be doing everything they can to get to that situation.

That fourth goal was there for the taking today and United should have went for it. The risk of conceding a goal to Brighton is certainly worth the reward of clawing another goal back on Leicester.