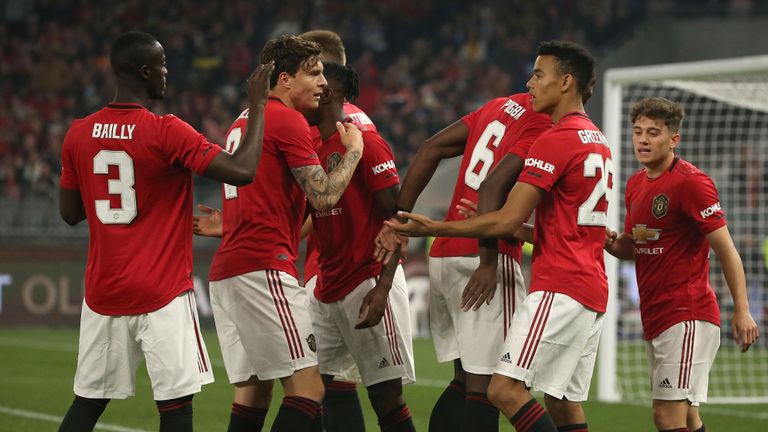 If he’s done nothing else Ole Gunnar Solskjaer has brought the fun back to the preseason. It’s fun to see the young players play alongside the senior players. It’s fun to form wildly over-optimistic expectations for how much the kids will be able to contribute this year. That’s what the tour is all about.

Last year United’s tour was dominated by Jose Mourinho complaining about the lack of available senior players. The kids played but Mourinho made it clear this was not “his team.” The year before that the kids didn’t even get a look.

This year we’ve got kids up and down the lineup not only making contributions but staking valid claims for places in the team. It’s fun again!

I’ve always said that while pre-season results are meaningless, you still need to win these games. Chelsea not winning a single friendly in 2015, and United winning only one last season were early warning signs that things were about to unravel for Jose Mourinho.

Anyway a 2-0 win over Perth and a 4-0 thrashing of Leeds are ultimately nothing to write home about but there are things to look for this pre-season, especially with some “tougher” competitions coming up.

Here’s what I’m looking to see this pre-season, hopefully Ole Gunnar Solskjaer is looking for the same things and hasn’t already made up his mind.

I said it when the rumors first started that James would be a great signing for United. He wasn’t as dynamic against Leeds as he was against Perth, but he’s only 21 so the consistency isn’t going to be there yet. Just needs to keep acclimating into the squad.

Not surprisingly he’s been brilliant. He continues to give no indication that he’s unhappy and has been the best player on the pitch in both games. He’s playing a deeper role on the right side of midfield and thriving. It’s very clear that Ole has built this team around him.

McTominay is making a real case to replace Nemanja Matic as a first choice player. It’s not just the way he’s played in the preseason, but also how he played last year when Matic was injured.

McTominay’s mobility is a massive upgrade over Matic, but still not where Ander Herrera was. He’s easily capable of playing as a lone holding midfielder against lesser opposition, but Solskjaer can’t be looking at him as a like for like replacement for Herrera.

Ultimately I see McTominay’s future as a very valuable squad player. A Darren Fletcher if you will. Hopefully the club brings in Sean Longstaff from Newcastle. The two of them pushing themselves and Matic will do wonders for the club long term.

Since his debut on the final day of the season against Cardiff the kid has been nothing short of spectacular. He’s still only 17 but at this point there’s no reason he shouldn’t be given somewhat regular chances this year.

I’m hoping he gets around 20-30 games this year. You don’t want to burn him out, or let him start to feel complacent, but the kid needs to play.

It’s no surprise that within minutes Wan-Bissaka proved he was worth every penny over the £50 million United paid for him. He’s better defensively than anything United have had at right back in years. His pace will prevent teams countering down the left side, a problem that plagued United last year.

Wan-Bissaka got forward much better against Leeds then he did against Perth, and picked up an assist for his efforts. His offense isn’t a finished product but at 21 it’ll come. He’s not going to need to provide offense every game. Against the bigger teams he’ll sit back and play more defensively, but against teams that sit deep his ability to get forward will be vital.

Really wish he would get more than just 10 minutes a game. He’s very young so he’s got time but he could easily become the holding midfielder United vitally need. I’m hoping he can get  5-8 starts this year, if nothing more than the value of having 5-8 games where Matic or McTominay can be rested.

Here’s a hot take for you. Phil Jones is not as bad as United fans make him out to be. He shouldn’t be a first choice center back, but if you pick up some injuries (and with Eric Bailly you always do) there are far worse options out there.

Not gonna lie. I’ve been very high on these two guys for quite some time. Probably because they’re just the highly touted academy kids.

Unfortunately so far I’ve yet to be impressed by them. That goes for their appearances last year and so far this preseason. It probably hasn’t helped that they’ve been in the less dynamic XI, playing without Pogba, Wan-Bissaka, and Rashford and instead been with the likes of Matic, Andreas Pereira, Ashley Young, and Jesse Lingard but it’s still been a bit of a disappointment.

At this point I wouldn’t be opposed to one (probably Gomes) of them going out on loan this year. United have too many games to send them both off.

United were at their best last year playing a 4-3-3 with Matic Herrera and Pogba in midfield. With Herrera gone that’s no longer an option.

So far in the preseason United have played more of a 4-2-1-3 and a 4-2-3-1. Pogba has played in a deeper role (don’t expect 15 goals from him!) but he’s switched from the left side of central midfield to the right. That’s allowed him to link up with Wan-Bissaka and Mason Greenwood down the right side.

So far it’s worked very well, and with Wan-Bissaka able to cover for him Pogba will be able to get further up the field (similar to the way City’s full backs cover the midfield). The pace and dynamism has also allowed United to press much higher up the field, relieving pressure from the back line.

These little tweaks should allow United a lot of flexibility, with Pogba pushing up to form a diamond midfield behind two forwards (if they want Martial to play more narrow), or even turning things into a 4-1-3-2 to allow Daniel James to stay wide on the wings.