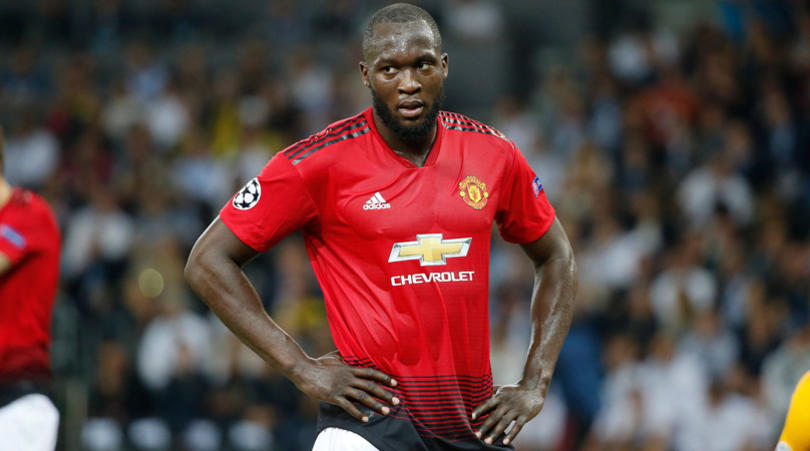 When Ole Gunnar Solskjaer was appointed caretaker manager at Old Trafford one of his most important jobs over the second half of the season was to assess the squad. Figure out which players were good, which were underperforming, which were simply being incorrectly used by Jose Mourinho, and do we have any youth players ready to come into the team?

Some of that was easy. Right away Maurouane Fellani was sold and Antonio Valencia wasn’t offered a new contract. Alexis Sanchez was deemed a lost cause.

We’ll do a quick run down on the rest of the squad in a separate post but the biggest question mark goes to striker Romelu Lukaku.

Lukaku was bought by Mourinho in a £75 million deal and has so far grossly underperformed. His play looked like it was picking up when Solskjaer came in… sort of.

There are so many questions when it comes to Lukaku. Is this the best he can do, is he being played out of position, is there another level he can get to?

It’s hard to answer those questions, but we’re going to try!

Lukaku came to United in a somewhat controversial £75 million move from Everton. The Belgian was coming off a very good season at Everton. He scored 25 goals and added six assists for an Everton team pretty devoid of talent. That’s pretty good!

But there were some red flags. Lukaku’s 24 non-penalty goals outperformed his xG by eight goals (15.90xG). He didn’t get a lot of shots. Most importantly, his goal scoring record against big six sides was appalling.

That final issue was a major concern. It wasn’t just that Lukaku didn’t score against top six sides, it was that he barely even made an impact.

Additionally when Everton face a top six club they’re outmatched. They’re going to play a much more defensive game. That means not only is Lukaku going to get fewer chances but less support too.

His 0.03 xBuildup tells you everything you need to know. Against the top six everything ran through Lukaku.

That was supposed to change when Lukaku moved to Old Trafford. Instead of a supporting cast of Ross Barkley and Kevin Miralles, he would have Paul Pogba, Henrikh Mkhitaryan, Anthony Martial, Marcus Rashford, and Juan Mata.

With supporting players like that Lukaku would be getting far better service and far more chances in front of goal. And if defenses collapsed on him, he was surrounded by finishers who he could lay the ball off to.

Most importantly, Manchester United was not Everton. When playing top six sides they wouldn’t be going into a defensive shell. They were good enough to go right up against them.

That’s not what happened.

Lukaku got off to a flying start at Old Trafford but faded after a few months. His xG and xA dropped in each of his two seasons. Despite all the weapons available to take the pressure off him, Lukaku’s numbers still dropped when the competition toughened.

Again. The samples are skewed because he played far more minutes against not top six teams. Additionally by virtue of being on Manchester United that cuts the maximum amount of games he can play against the top six down by two.

To get a bit bigger sample take a look at the totals for the past three seasons.

Both Roberto Martinez and Jose Mourinho primarily used him as a lone striker, so the logic that he should have more support under Mourinho since he had a better supporting cast still applies. Ole Gunnar Solskjaer used Lukaku out wide or in a pair up top. (It should be noted, that the 1.91 xG Lukaku got in United’s trip to the Emirates this season was the highest total Lukaku had in a single game in any of the three years.)

Despite the sample size these numbers do point to an overall trend.

His dominance at West Brom came from being the main guy in a system built around him. Everton was the same way, as was Mourinho’s United, and each of those teams had more weapons around him. Logic says that he would only improve under those situations but that wasn’t the case. 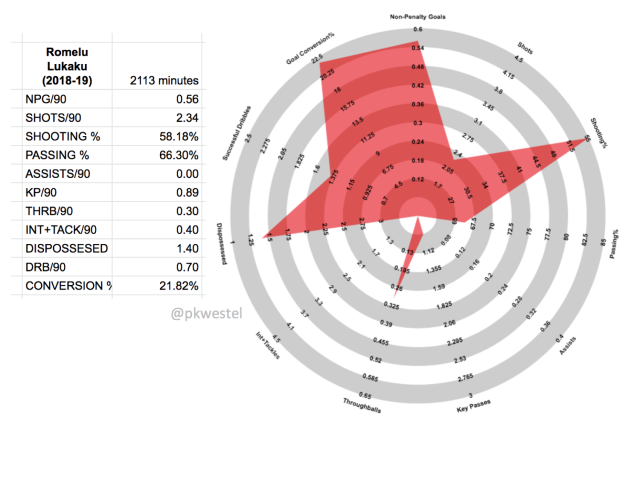 It’s hard to find an apples to apples comparison to Lukaku. Harry Kane might be the closest, but he’s played with the same manager in the same system for five years.

In order to most closely replicate Lukaku’s situation at United there’s really only one player to look at. The man he replaced. Zlatan Ibrahimovic.

Zlatan arguably had a worse off supporting cast. Wayne Rooney was on his last legs. Paul Pogba was still settling in. Rashford and Martial were a year younger and less experienced.

The numbers are starkly different. Zlatan got more shots per game than Lukaku regardless of the opponent. Against top six sides, Zlatan was selfish, acting as the talisman United needed him to be.

In fact, it was his play against everyone else that necessitated United needing to sign Lukaku. Zlatan likes to drop deep and be a provider (as the numbers back up). He likes the ball played into his feet. He doesn’t like to run in behind. That made United far too predictable against sides that just wanted to sit back. They struggled to score against bottom teams, especially at home.

That’s why United went for Lukaku. He was a player that could punish those teams. To a certain degree, it worked. As the numbers showed, he killed those clubs.

Unfortunately, that’s where Lukaku maxes out.

So what is Romelu Lukaku?

Lukaku thrives against mid or lower table sides. The more open the game is, the better he is. His two best games this year were against Crystal Palace and Southampton. Two mid-table teams who decided United were ripe for the picking (they had injuries) and had a go at them. He scored four goals in those two games.

This form extends to the international game as well.

When Roberto Martinez took over Belgium, he made Lukaku the center of the attack. Lukaku scored 23 goals in his first 20 games. But all those goals came against weaker teams. Arguably the toughest teams he scored against were friendlies against Mexico, Japan, and Costa Rica

When Belgium came up against Brazil in the World Cup semifinal, Martinez moved Lukaku out wide. It’s a tactic he started using at Everton because he knew that Lukaku had a tendency of getting man-marked out of a game against strong opponents.

It’s not surprising that Lukaku scored four goals against Panama and Tunisia, then was kept off the board by Brazil, Japan, France, and England.

Lukaku was never worth the £75 million Manchester United paid for him. He’s a good striker to have on your team (for the right price).

When all is said and done, if your manager has to move you out of position against good teams just so you can be effective, you’re not a top striker.

6 thoughts on “What exactly is Romelu Lukaku?”