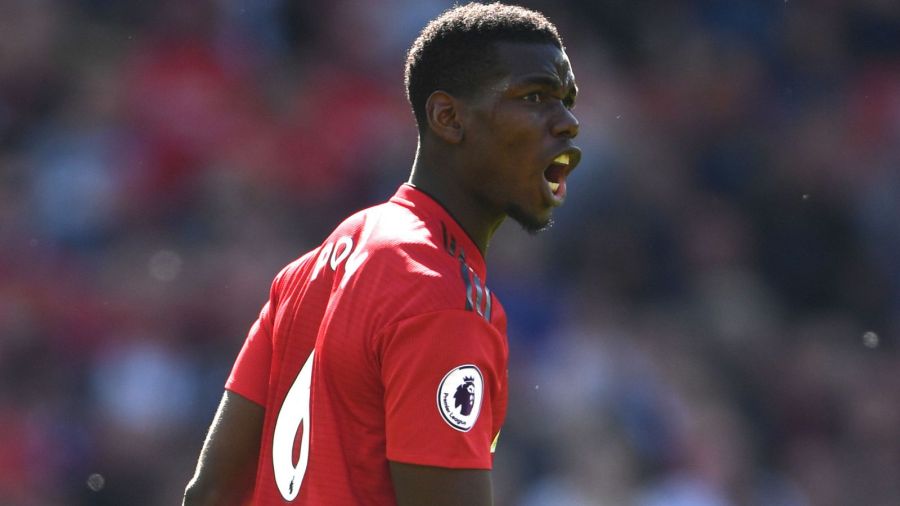 When the Paul Pogba to Real Madrid rumors first started my initial reaction was to just ignore them. Pogba was with France on international duty, France star Zinedine Zidane had just been named manager of Real Madrid. Of course Pogba was going to say it would be a dream to play for him.

He’s with the French national team, what else is he supposed to say!

There was another element to it. At the time, Pogba’s form with United was sky high. He was Manchester United’s most important player. But when he looks at Alexis Sanchez sitting on the bench and collecting those enormous wages, it’s only natural for Pogba to say “wait, I actually deserve to be paid like that.”

And thus, suddenly getting linked to Real Madrid isn’t a bad way to maneuver for a new contract.

To me that’s all it was, Pogba angling for a new contract.

I never got the feeling that Pogba didn’t want to be in Manchester. Hell, he left Turin and returned to Manchester. Manchester is a cool city and all but the winter there sucks. The weather is cold and rainy every day. It’s miserable.

If you’ve experienced that before you wouldn’t choose to go back unless you wanted to. Money talks but ultimately Pogba wanted to be here. His best friends were in Manchester. His “adopted” family whom he lived with in his academy days were in Manchester. He chose to come here even though they were managed by Jose Mourinho, a manager who’s style was never ever going to mesh with Pogba.

In March this was pretty clear cut. Pogba wanted more money and he absolutely deserved it.

You know the saying timing is everything. That couldn’t be more accurate here.

When Pogba returned from France it coincided with United getting hit by the injury bug. Pogba’s role changed. He had to play more defensively to cover for United’s lack of midfield.

His withdrawn role prevented him from getting involved on the attack. Without Pogba pulling the strings, the rest of United’s attackers suffered. United’s form dropped.

Pogba can’t do everything himself. It turns out, unless your Lionel Messi, no one can.

The amount of turmoil at Old Trafford over recent years has given rise to a blame culture from the Manchester United fans and media. Things aren’t going well and people feel the need to point the finger at someone. That finger is being pointed at Pogba.

Pogba can’t win. Whatever he does he’s criticized for. When he played well he was accused of being unprofessional and quitting on Jose Mourinho.

(Eden Hazard has been involved in at least 16 Premier League goals every year at Chelsea. During Mourinho’s final year he had four goals and four assists. Pogba had his best season this year. Who’s the one who “quit” again)?

When Pogba doesn’t play well, he’s accused of of not caring. He’s selfish. He only cares about his brand and social media.

Players from every team have sponsorships but how dare Pogba have won! How dare he post pictures from a children’s hospital when visiting sick kids!

The length that the media and fans will go to criticize him knows no bounds.

Paul Pogba leads the way – off the pitch. First player down the tunnel. Dalot and McTominay staying out the longest. Both put their hands up to fans apologetically. #mufc

Can you really blame him for walking off the field? Do you really think Pogba walking over to a bunch of angry supporters after a 4-0 defeat would have had a positive outcome?

We now know for sure that it wouldn’t have. After the Red’s 2-0 defeat to Cardiff Pogba did go over to the fans and was met with nothing but abuse!

Did the media pay attention to this? You bet ya. The next thing you know all anyone could talk about was Paul Pogba’s ‘altercation’ with the supporters.

Paul Pogba clashed with a section of angry Manchester United fans after their defeat to Cardiff 😤😤😤 pic.twitter.com/PCUiCZRxcK

Clash? Altercation? What altercation? Pogba doesn’t do anything! He joins his teammates for a lap of honor to thank the fans. At the end he takes abuse from a group of fans. Did Pogba say anything back? Did he walk towards them in a threatening (or even non-threatening) way?

No. He put his hands together in the prayer sign and walked away. Over the next two the media was jumping over themselves trying to get their criticisms of Pogba in.

Paul Pogba was objectively Manchester United’s best player this season. His involvement in 15 goals from open play was second to only Ryan Fraser among midfielders, and Fraser plays in a more advanced position. Pogba’s nine open play assists and 0.48 xG90 led all midfielders who played at least 1000 minutes.

This season, Paul Pogba ranks 1st for United in:

If there’s one thing to criticize Pogba for, his 0.35 xBuildup is a bit low. That’s primarily a function of Pogba being involved on every United goal. The real criticism here is that United’s forwards, Romelu Lukaku, Marcus Rashford, and Anthony Martial, scored just 12, 10, and nine goals respectively. 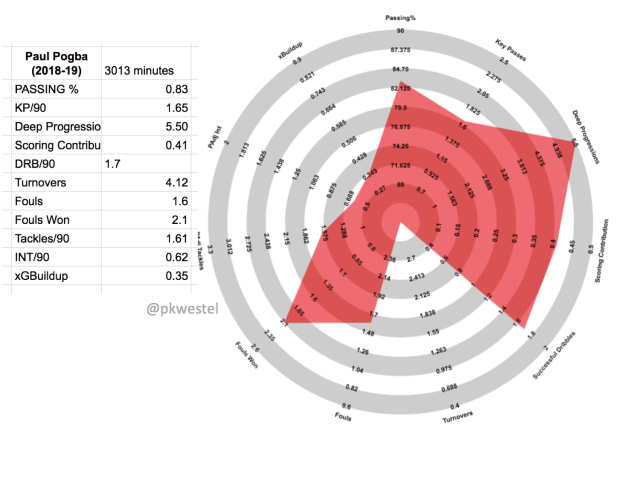 In March I really didn’t think Paul Pogba hated or wanted to leave Manchester. Two months later, what choice does he have?

The fans and media seem hellbent on running him out of town. No matter what he does it will never be good enough. Can you really blame him if he wants to leave now? Why would he want to play in this kind of environment?

The irony here is that Manchester United fans know a massive rebuild needs to be done. Pogba is a player young player you can build around. By getting rid of him you make the team worse. That will only make the rebuild a tougher and longer task.

United fans won’t want a long rebuild. But they’ll have no one to blame but themselves.

7 thoughts on “What’s next for Paul Pogba?”