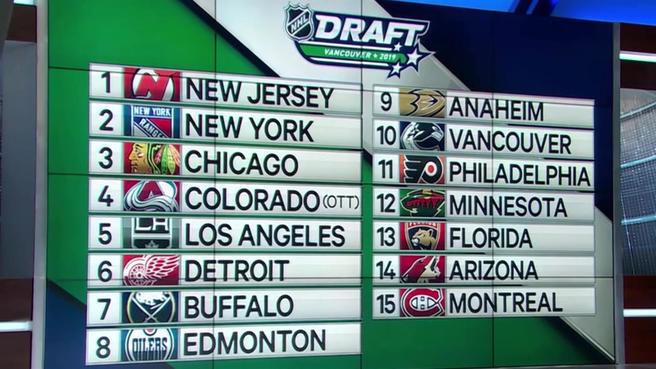 The rarest of rare things happened Tuesday night. The hockey gods smiled down on the New York Rangers as the Rangers snagged the #2 overall pick in the draft lottery. That means landing either American Jack Hughes or Finn Kaapo Kakko. (That is, as long as the Rangers don’t fuck this up).

Landing the second pick is huge as the dropoff between the top two this year is pretty significant. Picking second also gives the Rangers the freedom from criticism. The choice between Hughes and Kakko will be made for them when the Devils pick at number 1.

Hughes has been the consensus #1 pick throughout the year, but that’s not to say that Kakko isn’t better. The two squared off in the gold medal game at this year’s World Junior Championship where Hughes’ USA team erased a 2-0 defecit only to lose 3-2 – with Kakko scoring the game winner. It should be noted that Hughes was injured for much of the tournament.

As for the Rangers, grabbing the second pick puts them in a great, but interesting spot.

This season management made it clear that they planned on tanking the season to get a better draft pick. But no one told that to first year head coach David Quinn.

Quinn had a young team playing hard night in and night out. There was no quit in his team. They won games they shouldn’t have won (for tanking purposes and because they were outplayed), and despite struggling to score goals, they took an astonishing 40 games to overtime.

The team now is in a really interesting spot. They have a very young nucleus. Many of their guys are former first round picks, who never turned into I-can-carry-the-team superstars, but became very solid role players. That gives the Rangers depth. What they need is a superstar.

Kaapo Kakko gives them that star. Probably not next year, but the team is expected to make a big push for Artemi Panarin. That would give them a very solid 1-2 punch at the top of their lineup, to go along with Mika Zibenajad, Pavel Buchnevich, and Chris Kreider.

Defensively the Rangers still need to get a little stronger. Neil Pionk and Brady Skei are nice pieces, but Tony DeAngelo has never been able to lock down a permanent spot in the lineup and who knows what you’ll get from Marc Staal or Kevin Shattenkirk.

In goal the Rangers are still solid. Henrik Lundqvist isn’t as good as he used to be, but he’s still damn good. Behind him Alexandar Georgiev emerged as a fantastic backup and Russian stud Igor Shestyorkin is expected to come over next year.

Signing Panarin puts the Rangers in a very interesting spot, and begs the question of what do you do with Kakko?

The Rangers haven’t picked this high in the draft in forever, so they’ve rarely been forced to make this decision. Usually their first round picks are stashed away for at least a year, but Kakko is different.

Signing Panarin switches the Rangers to a win-now team but one that might not be ready to win now. It’s certainly possible that Kakko can come in and make an instant impact like Austin Mathews. That’s fairly routine for top picks in the draft these days. It’s also possible that he struggles in his first season.

The answer to that is simple. If the Rangers sign Panarin and do nothing else, they’re a team capable of challenging for the final playoff spot – aka they won’t be anywhere near the top of the draft. If you don’t have a good shot at getting another top three pick next year, then there’s zero reason not to have Kakko in the NHL next year.

Furthermore the Rangers will have other question marks. Fillip Chytil had a great stretch early in the season, but finished the year with just 23 points. He may be another year away from really making the jump. Vitali Kravtsov is expected to come over from the KHL, but for all the hype he only had 23 points this year. As for Lias Andersson? It’s hard to write off a 20 year old but he’s yet to show that he can be a top 6 player in this league.

It’s entirely possible that these guys all need another year before the Rangers are really ready to contend. That’s why it’s important to not put any expectations on David Quinn and the team. Quinn needs to be able to focus on letting these players grow and develop, not necessarily winning games.

If Kakko is struggling and Quinn limits his ice time in a playoff push, who does that help? Is it worth it for what would likely be a first round exit? Let the guys play and grow. If the team finishes just outside the playoffs and has to pick 12th in the draft, so be it. They’ll be much better off in 2021 because of it.