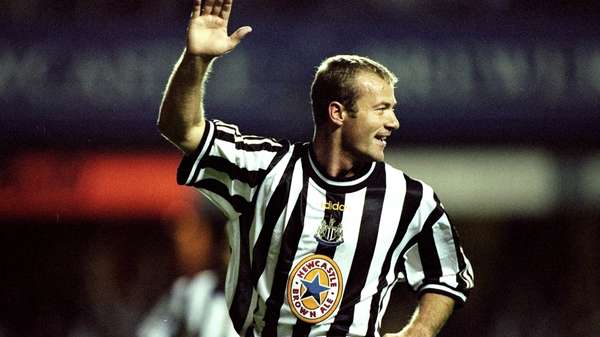 Sergio Aguero scored his 11th Premier League hat-trick Sunday in Manchester City’s 6-0 thrashing of Chelsea, equaling Alan Shearer’s Premier League record of 11 hat-tricks. As someone who ran a social media account for a major media company let me tell ya, when something like that happens over the weekend your job is real easy Monday morning. No need to waste time thinking of a poll question, you get to just run back the old reliable “is this player the best ever” or “who is better question.”

On Monday morning Sky Sports did not disappoint, asking who is the best ever Premier League goal scorer between Aguero, Alan Shearer, Wayne Rooney, and Thierry Henry. The results provided an alarming, yet predictable, look inside the mind of English football fans.

POLL: Who is the Premier League's best ever goalscorer? 🤔

After 92,000+ votes, Shearer is in the lead with 36% of the vote, followed by Henry (28%), Aguero (22%), and Rooney (14%). Astonishing, yet completely predictable. A lot of “probably the man with the most goals is the best goalscorer” responses, which when you think about it is ridiculous. The question is asking who is the best, not who has the most.

Again, I’m not shocked. English fans love Shearer (they should love Rooney too but too many will blame him for his actions against Portugal in the 2006 World Cup and his off field exploits), and the idea that they would pick a foreigner over an Englishman is laughable.

For everyone who says it’s Shearer and it’s not even close, I have news for you. You’re romanticizing the man. He’s not as good as you’re making him out to be.

In terms of pure football ability Shearer is a distant fourth behind the other three.

When it comes to being the best goal scorer Shearer is probably third best, behind Aguero and Henry and head of Rooney.

Personally I’d rank Aguero first but I hear both the arguments for Henry and the arguments against Aguero. Mainly that he plays for a loaded City team that scores for fun. Having said that, he’s done nothing but score since arriving in Manchester and he did play for several City teams that were not as good as the current version. Nevertheless there is a valid argument that he plays with several very creative players and is the beneficiary of that support.

But Shearer? Get out of here. If we’re going to use the system as an argument against Aguero then Shearer’s entire argument has to be thrown right out.

Shearer’s most prolific years came at Blackburn where the team played the most basic 4-4-2 ‘route 1’ formation. Shearer played behind a target man, who’s job was to flick the ball on to Shearer to run in behind the defense. The system was designed to get Shearer the ball in the box and for Shearer to score nearly all the goals. At Newcastle, the system wasn’t much different.

No one is trying to argue Shearer’s finishing. He was deadly in front of the net, from just outside the box, and on set pieces. But he didn’t have to do anything else. The teams were designed to get him the ball and get him goals.

Compare that to the other three players who all played in teams where the scoring was more spread out. Henry set the Premier League record for assists in a season in 2003 when he set up 25 goals. He did that while scoring 24 goals himself that season.

As for Rooney, he’s in a whole different ballpark as a player. He’s one of three players (Ryan Giggs, Frank Lampard), to score 200 Premier League goals and pick up 100 assists.

Unlike Shearer, Rooney’s Manchester United teams were rarely built around him. Only twice was he the focal point of the team, 2009/10 and 2011/12 where he scored career highs of 26 and 27 goals. When he arrived at Manchester United, he played second fiddle to Ruud van Nistelrooy, then to Cristiano Ronaldo. At the latter end of his United career he was second fiddle to Robin van Persie, Anthony Martial, Marcus Rashford, and Zlatan Ibarhimovic. Despite all that, he still became Manchester United’s all time leading scorer.

What it ultimately comes down to is simple. Time. Players today are better than players were 15 years ago. 15 years from now players will generally be better than todays players.

That’s the way sports work. The more time goes by the more influences younger people can have. Zlatan Ibrahimovic grew up idolizing Brazilian stars like Ronaldo and Rivaldo among many others. He was able to take aspects of their game and mold it to his.

Players today also can learn from Ronaldo and Rivaldo. But they could also look at Ibrahimovic, Lionel Messi, Cristiano Ronaldo, and Robert Lewandowski. They can take aspects from all these guys and mold it into their own.

Shearer played at the inception of the Premier League. That was right when soccer universally introduced the back-pass rule. When that happened, perceived “great defenders” struggled mightily. It took years for players to fully adapt to it.

Simply put, the Premier League was completely different back then. The defenders and midfielders Shearer ran through don’t hold a candle to the ones Henry and Rooney went up against and now the ones Ageuro takes on. Shearer was really good, but everyone else wasn’t, making Shearer look even more dominant.

We’re getting long here so let me wrap this up. Take a look this highlight video of some of Shearers greatest goals. Compared to today, this is very… underwhelming.

Alan Shearer was the best playing at his time. But don’t let nostalgia fool you into thinking he’s the best of all time.