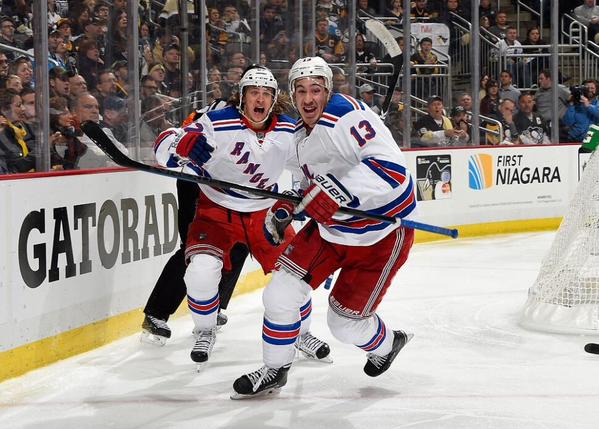 Well that game started exactly how I expected it to. Penguins came out like a desperate hockey team and the Rangers didn’t even know they were playing a hockey game. Just an absolutely ugly and embarrassing first period from the Rangers where they couldn’t even complete a pass to each other and didn’t get a shot on goal for over half the period. Surprise surprise just over two minutes into the game the Rangers found themselves down on a not good but not exactly soft either goal for the Penguins.

Then came the first intermission where AV did something uncharacteristic and ripped the players a new one in the locker room. Whatever he said seemed to work as the team came out actually playing hockey in the second period and were rewarded with a hard working garbage goal, exactly the kind of goal you need to get to win in the playoffs. In fact that’s what both of their goals were, just hard working goals from right in front of the net.

Overall this was an ugly ugly game that I still can’t even explain how the Rangers pulled it off. Like I said the game started exactly the way I thought it would because that’s how every Game 2 or 4 when the Rangers have a series lead starts. I even considered just flipping over the Mets game because I had already seen this game 100 times. But usually the Rangers give up that crappy goal early and the goals keep coming. That didn’t happen tonight, partially because despite the Rangers not being able to do anything with the puck, they were just good enough defensively to not allow the Penguins any great scoring chances. Good teams win games in the playoffs that they have no business winning and that’s exactly what the Rangers did tonight.

Now we shift our focus on to Game 5 where once again the Rangers need to prove to me that things are different this time. Last two times the Rangers played a Game 5 with a 3-1 lead it didn’t go to well. There was 2009 in Washington, where they lost 4-0 and John Tortorella decided to spray water at Caps fans, and then there was the drubbing they got from Montreal that led to Lundqvist getting pulled in Game 5 last year. Things are different this time with the Rangers being at home, but like I’ve been saying, this team lacks a killer instinct and even though they pulled out a win in Game 4, they didn’t exactly prove that the killer instinct was there.

Lets go out there and take care of business in Game 5 so we can get a few days to rest up and pray the Caps and Islanders continue to kill each other over a full seven game series.

*Remember the time in my playoff preview when I said this Rangers team can score and therefore they won’t need to win as many 2-1 games in the playoffs? Man what was that guy talking about?!?!