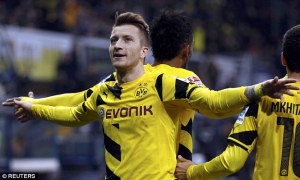 In case you missed it, I just delved into my love affair with Borussia Dortmund and where it came from this year. Anyways, onto the match.

A lot of former Manchester United players in that Juventus squad, which I hadn’t realized until the first leg of this tie is scary good. They are, however, missing one very very key piece as midfielder Andrea Pirlo has been ruled out of the match. That’s very good news for Dortmund.

As anyone will tell you, it’s almost impossible to predict a Borussia Dortmund match this season since as you have no idea which Dortmund team will show up since their domestic form has been so bad, and their European form has been surprisingly good.

Ultimately there are a few things going in Borussia Dortmund’s favor for this match. Juventus being without Pirlo is a huge blow, and despite having a scary good team, their away form in the Champions League this year has actually been pretty bad. That won’t help them today when they visit the Westfalenstadion, which gives Dortmund one of the best home field advantages in Europe.

Ultimately that should be enough for Dortmund to come away with the victory especially since I’m not ready for my Champions League affair with the club to come to an end.

As always follow me @pkwestelWFAN where I’ll be live tweeting the match.