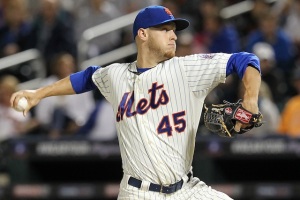 ESPN – New York Mets right-hander Zack Wheeler has been diagnosed with a fully torn ulnar collateral ligament in his pitching elbow and is headed for Tommy John surgery that will cost him the entire season.

Wheeler underwent an MRI on Saturday in Florida that was reviewed by team doctor David Altchek.

I know I’m a day late with this but this past weekend The Sweatpants Report was out celebrating a wedding that took the better part of of Monday to recover from. But were back now so here we go.

First of all I just want to say congratulations to the New York Mets. You finally had your fans being optimistic about this season and you didn’t even make it to St. Patrick’s Day before ripping all that optimism away from your fans. Quite the accomplishment.

But this loss isn’t actually as devastating for me as it seemed to be for everyone else on twitter yesterday. I’m not saying I’m not a Zack Wheeler fan, I am. I just don’t think I’ve bought into the Wheeler hype nearly as much as everyone else has.

I keep hearing all about how Wheeler is supposed to be an ace and become one of the best pitchers in baseball, but frankly, I haven’t seen it yet. I know the numbers are there; over the past two seasons he’s led the Mets in strikeouts, was second in wins, and third in innings pitched. I know it seemed like he finally turned a corner last season and really came into his own, but everyone keeps saying he’s not there yet and they’re expecting him to really make the jump this season.

The thing about making the jump is it either happens or it doesn’t. If it happened like everyone expected, myself included, then the Mets rotation would be scary good this year. But that doesn’t mean it was guaranteed to happen.

In 2013 Matt Harvey took the baseball world by storm. Losing him to injury last season was devastating, but then Jacob deGrom came along and by the time he was mowing down hitters in July I had almost forgotten about Harvey. The reason I bring that up is because I never got that feeling about Wheeler. With Harvey and deGrom in the mix Wheeler would max out as the Mets third best pitcher and in my opinion isn’t even close to the top two.

This isn’t the end of the world for the Mets as Dillon Gee, who is more then capable, will step into the rotation (unrelated story: I’m a huge Dillon Gee fan). When you factor in other injuries and just the wear and tear of the season the path is now much easier for other Mets phenoms Noah Syndegaard and Steve Matz to break into the rotation around late May/early June. Who knows, maybe one of those guys may even make you forget about Wheeler.