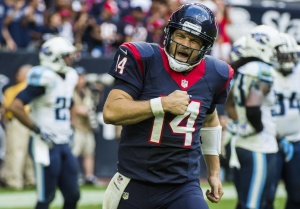 Texans are trading QB Ryan Fitzpatrick to the New York Jets for a late-round conditional draft pick, per a league source.

There we go Mikey Mac. Going out there and bringing back Darrelle Revis, reportedly very close to bringing back Antonio Cromartie, and taking one look at Geno Smith and saying “NO WAY.”

This is a great move for the Jets. Not because Ryan Fitzpatrick is a great quarterback or a long term solution at the position. He’s not. The important thing about this move is that this move shows that the Jets are acknowledging that there  are no long term QB options available this year.

It’s unclear whether or not Jamies Winston or Marcus Mariotta would even fall to the Jets at number six. What is clear though is that there are way too many question marks about both of them to ever feel comfortable about making them your long term plan; and Geno Smith sure as hell isn’t an option.

What the Jets now get with Fitzpatrick is a competent NFL QB who they can compete with for the next two years, while they search for a long term option. Fitzpatrick won’t be the QB of the Jets three years from now and that’s more then OK. This also gives the Jets the option of drafting a lesser known QB in the later rounds and letting him develop and learn under a veteran QB who’s been around the block.

In under 24 hours the Jets have no added two corners, possibly a third, and a real life NFL ready QB to go along with the big name wide receiver they got last week. Now their sitting pretty with the number six pick, having already filled a few needs and they can now do with that pick whatever they so please. Things are finally looking up for #Jetsnation