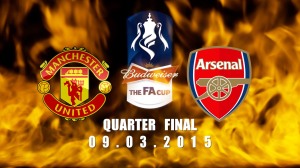 Another game and another chance for Juan Mata to sit on the bench. It seems that all those goals he scored and helped create back in November and December have landed him a nice permanent spot on the bench.

As for this game I actually thought we needed Blind, Carrick, and Fellaini in the team until I realized that if all three of those guys played, plus Valencia and Young where the hell were the goals going to come from? So again if Young and Valencia are just going to be bombing in crosses, you may as well have Fellaini in there.

Beating Arsenal is just about the last thing we have remaining from the Sir Alex Ferguson era. The last time Arsenal won at Old Trafford was in 2006, which is when Cesc Fabregas was starting to make a name for himself there. So let’s hold on to one of the last relics of the Fergie era and keep our dominance over the Gunners at home.