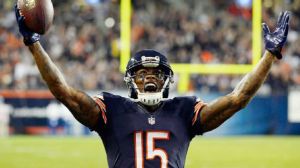 Bears have agreed to trade WR Brandon Marshall to the Jets pending a physical, per league source.

Love this move from the Jets. Stop worrying about who is going to fall to you at number six in the draft and instead go out there and make something happen. No word on what is going back Chicago’s way but I’d assume it’s only something like a midround pick or two.

Over the past few years the big complain has been the Jets have no talent at the skill positions and receivers that can’t get any kind of separation and get open. Well the Jets are now showing that they are trying to fix that problem, adding Marshall to a receiving corps that already includes Eric Decker. Will they bring back Percy Harvin? Who knows? Maybe they will maybe they won’t but I’m ok with Jeremy Kerley being their third best receiver.

All in all it’s a good day for the Jets coming just a few days after Buffalo made them squirm by bringing LeSean McCoy into the division.

*Hold on a minute. Oh right, the Jets STILL don’t have a QB so what does this move even do? You can have the best wide receivers in the world but it doesn’t matter if you don’t have someone that can actually throw the ball to them when their open. Geno Smith sure as hell won’t be able to do it, and Winston and Mariotta either won’t be there at #6 (if Mariotta is there the Jets likely send that pick to the Eagles) and aren’t the answer at QB anyway. Go out and get a god damn QB, one that can 1) see the receivers when their open and 2) has the talent to actually throw the ball to open receivers because right now they don’t have one on their roster.