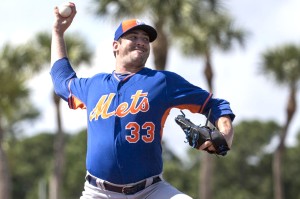 CBS New York – Everyone around the Mets — players, fans and even their opponent — is looking forward to Matt Harvey’s spring debut on Friday.

But manager Terry Collins just hopes his right-hander doesn’t go full-on bulldog — pitching at max effort — in his first start since being diagnosed with a partially torn elbow ligament in August 2013.

To say everyone is buzzing about this would be an understatement. Hell I’ve been jacked up for this game since yesterday afternoon. It’s absurd and I’m borderline ashamed because IT’S A SPRING TRAINING GAME! Seriously, Harvey is going to throw two innings of baseball and that’s what were excited about. But then again when you’re a Mets fan and you spend your life rooting for a team with PR blunders and no on field success, these are the kinds of things you get excited for.

As for the actual Mets, it’s hilarious that their actually worried about Harvey being “too jacked up” for his return to baseball. I mean yea the guy is excited to return to the mound in a real baseball game for the first time since August 2013 but I think even Harvey realizes this isn’t a real game. I like to think Harvey is smart enough to see the big picture and keep everything under control and just focus on getting back to 100% so he can be mowing down hitters when it counts, but then again I guess when you factor in that this is The Dark Knight were talking about, all bets are off.

*Any true Mets fan knows exactly how this is going to go. Harvey will look dominant in the first inning today and then his arm will just come flying off in the second inning because those are the things that happen with the Mets and we’ll all remember that and wonder why we got so excited in the first place.