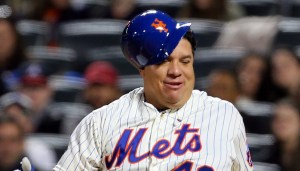 Kevin Long on Bartolo: “Got some work to do. He’s not too vested in putting that much time into getting his swing where it needs to be.”

Just love it from Bartolo here, absolutely love it. Hey Bartolo, you want to work on some hitting it’s part of your job now that you pitch in the National League? Colon responding with a no thanks I’m good. Think I’ll just concentrate on pitching and collect my paycheck since you signed me to a ridiculous two year contract.

Bartolo Colon knows what he is and he ain’t planning on changing. 41 years old and has been pitching in the American League practically his whole life. Oh you want me to get twice as many hits as last year? How about if I get three hits this season everyone goes home happy? Deal?