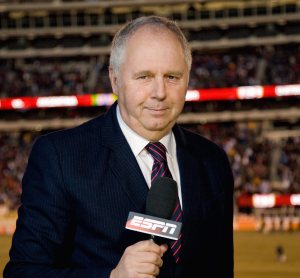 The Big Lead: Katie Nolan, a personality on Fox Sports 1, appeared on the BS Report last week. Around the 58-minute mark, there was an interesting wrinkle — that Bill Simmons tried to hire her for Grantland. However, it fell through due to mysterious-sounding contractual hiccups, which we’ve since learned involved a blockbuster media trade failing to come to fruition.

What a trade this could have and should have been. As far as I’m concerned, it would be a win for both sides.

I’m a huge fan of Katie Nolan despite never really watching her videos. I think she’s underutilized by Fox, and if I’m reading her twitter feed correctly, she’s been passive aggressively hating on Fox for a while now. I think Grantland would give her a much bigger platform to really go out there and utilize her talents. I probably still wouldn’t watch her web videos, but that’s mainly because I don’t have the patience to watch anyones youtube shows.

As for Fox, landing Ian Darke would be a goldmine for their in-dire-need-of-improvement soccer coverage. It’s no secret that fans don’t have a lot of faith in Fox to put on a good professional broadcast for the 2018 World Cup and bringing in Darke, who has become the voice of US Soccer over the past five years, would bring them instant credibility.

The move would really pay dividends for Fox if they were smart and added Darke to their Champions League and if possible, FA Cup coverage. Having him call the big matches in both competitions would be a welcome addition for American fans. Unfortunately, given Fox’s track record it would be a major stretch to assume that Fox would do the smart thing and utilize him on their Champions League coverage.

The move would even likely benefit Alexi Lalas, who has looks miserable sitting on the Fox set every time Warren Barton or Eric Wynalda opens their mouth’s. Perhaps bringing his former ESPN colleague on board would make Lalas feel more at home and look more comfortable.

Unfortunately Katie Nolan has a new show launching on Fox Sports 1 this March, but if Fox were smart they’d be doing everything they can to acquire Ian Darke and add him to their soccer coverage immediately.